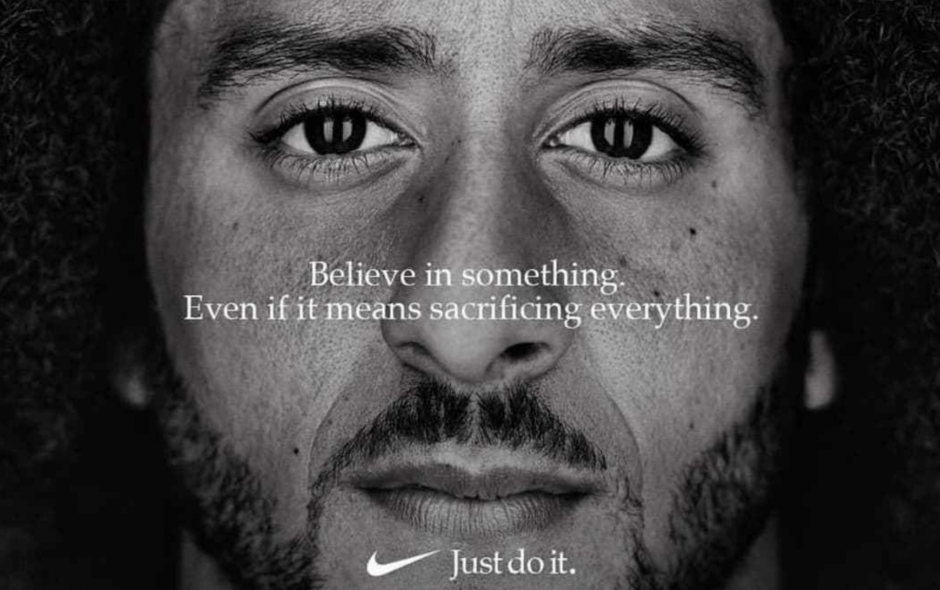 Yesterday, Nike kicked off a new ad campaign featuring Colin Kaepernick, in celebration of its thirtieth anniversary of its iconic Just Do It campaign — three days before the 2018 NFL Kickoff Game takes place in Philadelphia, with the Falcons visiting the Eagles.

No doubt, the former San Francisco 49ers quarterback’s demonstrations to bring attention to police brutality and racial inequality coupled with his heightened exposure as the face of Nike will exhilirate some fans, infuriate others, and send the National Football League scrambling into an emergency public relations huddle. Add to the mix, Nike and the NFL’s recently signed a $1 billion, eight-year deal in which the sports and lifestyle clothier will supply uniforms and sideline apparel for all thirty two teams, the country could see some serious butting of heads.

We believe Colin is one of the most inspirational athletes of this generation, who has leveraged the power of sport to help move the world forward. We wanted to energize its meaning and introduce ‘Just Do It’ to a new generation of athletes.
— Gino Fisanotti, Nike brand vice-president for North America

Typically the NFL approves all ads involving their players, but since Kaepernick is not under contract with the league, neither Kaepernick nor Nike owes them no right of approval.

The president’s attack calling for NFL team owners to “get that son of a bitch off the field,” referring to NFL players who took a knee during the national anthem, was unnecessary, unwelcome, and self-serving. The league’s initial response was —

The NFL and our players are at our best when we help create a sense of unity in our country and our culture. Divisive comments like these demonstrate an unfortunate lack of respect for the NFL, our great game and all of our players, and a failure to understand the overwhelming force for good our clubs and players represent in our communities.
— Roger Goodell, NFL Commissioner

The executive director of the NFL Players Association (NFLPA), said of the union —

We will never back down when it comes to protecting the constitutional rights of our players as citizens as well as their safety as men who compete in a game that exposes them to great risks.
— DeMaurice Smith, NFLPA Executive Director

It baffles me is that kneeling during the national anthem — a peaceful, nonviolent demonstration, protected by the Constitution’s First Amendment — an act intended to bring attention to acts of police brutality against black people — is considered disrespectful. It’s like a certain segment of the population, has no concern that another portion of the population is not afforded the same respect and protections under the law.

This partial list of unarmed black men, women, and children shot and killed by police are staggering accounts of police brutality that have occurred, and rarely with conviction.

This is a topic that warrants discussion and Kaepernick’s demonstration was intended to bring necessary attention to a subject some would rather ignore.

You want to talk about disrespecting the flag? Flag burning is disrespectful, yet the Supreme Court protected it as a means of political protest covered the First Amendment in Texas v. Johnson, in 1989. If Mr. Kaepernick wanted to be dishonor the flag, this would be the means to do so, but this is not the type of demonstration Mr. Kaepernick chose to employ.

On more than one occasion Mr. Kaepernick has expressed his rationale for taking a knee. You can read a Sports Illustrated interview that includes statements by Mr. Kaepernick here.

The president’s overt display of disrespect levelled at the late prisoner of war, Navy captain, and thirty-year senator John McCain by flying the flag atop the White House at full staff for the minimum amount time as stated in the U.S. flag code. (The president acquiesced and lowered the White House flag to half-staff, only after harsh criticism from both Democratic and Republican Congressmen, and a statement from The American Legion on behalf of their two million wartime veterans.)

It seems to me that veterans, blue- and gold-star families alike would take great offense to the president’s public display of disdain for McCain and his celebrated history. Think about it. If this guy can regard one of the most lauded veterans of our time with such contempt, how much honor can he possibly hold for less venerated. But it seems the president’s patriots only wanted to discuss his disrespect in the past tense, well after he had been forced to lower the White House flag.

If racial equality isn’t front of mind with you, why tear down the effort of others who willing to fight that fight? How can you in good conscience drape yourself in the American flag with its tenets of “we the people,” liberty and justice all, and equality under the law, and not want to level the playing for your fellow Americans?

If your brand of patriotism concludes when that giant flag is walked off the grid iron, I’ll opt for Kaepernick’s love of country and aspiration for a better America every time.

If your recreation is so precious that in the time it takes to sing one verse and a chorus of the national anthem that you can’t be bothered or reminded that you have fellow citizens who fight against the ill effects of systemic racism on a daily basis, the words to the anthem you sing are ashes in your mouth.

No matter who you’re rooting for, it’s gonna be a hot time on the old grid iron this season. Hopefully cooler heads will rule the day, and the country will unite around the reality that liberty and justice are not available to all.