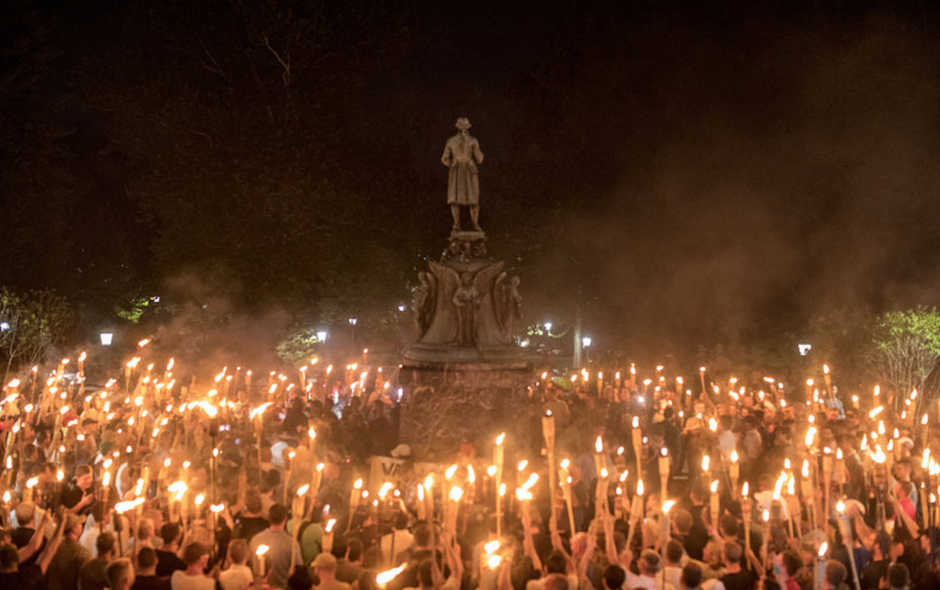 White nationalists led a torch march through the grounds of the University of Virginia on Friday night in Charlottesville, Va. Credit: Edu Bayer for The New York Times

How come nobody can let the past go and learn to love and respect each other?

A friend of mine who supports leaving Confederate memorials where they are posed that very question a few days ago. And it’s a good question. Why can’t Confederate sympathizers let go of the past? There’s a faction of Americans who believe that removing these memorials is an attempt to erase history of those who fought and died in historic battles. I disagree.

To get a proper perspective on the issue, let’s examine the reasons why the residents of thirteen states—Alabama, Arkansas, Florida, Georgia, Kentucky, Louisiana, Mississippi, Missouri, North Carolina, South Carolina, Tennessee, Texas, and Virginia—sought to not only secede from the United States of American, but fight to the death to preserve their way of life.

The common response is states’ rights. States’ rights to do what? Self-govern. There’s a bit more to the story than that.

The website civilwar.org is an organization dedicated to preserving battlefields as part of our national heritage, scenes of struggle and sacrifice where American soldiers lost their lives. A noble cause. They also provide an online repository of documents pertaining to American history, but primarily the Civil War. The keepers of this website state —

History is best understood by examining the documents and reading the words of those involved in the events one is studying. When these documents, photographs and other items were actually written at the time of the event, they are known as primary sources. From the Declaration of Independence, to the Emancipation Proclamation, and through letters, diary entries, and military orders you’ll find scores of primary sources here to read what people wrote at the time.

The Declaration of Causes of Seceding States is one such primary source and provides us with the definitive the reason why Southerners went to war … in their own words. And the overriding reason may surprise you. What follows are a few excerpts from that document.

Georgia
A Declaration of the Immediate Causes which Induce and Justify the Secession of the State of Mississippi from the Federal Union.

The Peach state provides an exquisitely detailed account of how the United States government purposed to limit, restrain, and finally abolish slavery. To which they responded, “the south with great unanimity declared her purpose to resist the prohibition [of slavery] to the last extremity.”

Mississippi
A Declaration of the Immediate Causes which Induce and Justify the Secession of the State of Mississippi from the Federal Union.

In the momentous step which our State has taken of dissolving its connection with the government of which we so long formed a part, it is but just that we should declare the prominent reasons which have induced our course.

“Our position is thoroughly identified with the institution of slavery — the great material interest of the world. Its labor supplies the product which constitutes by far the largest and most important portions of commerce of the earth. These products are peculiar to the climate verging on the tropical regions, and by an imperious law of nature, none but the black race can bear exposure to the tropical sun. These products have become necessities of the world, and a blow at slavery is a blow at commerce and civilization … There was no choice left us but submission to the mandates of abolition, or a dissolution of the Union, whose principles had been subverted to work out our ruin. That we do not overstate the dangers to our institution, a reference to a few facts will sufficiently prove.”

“Our decision is made. We follow their footsteps. We embrace the alternative of separation; and for reasons here stated, we resolve to maintain our rights with the full consciousness of the justice of our course, and the undoubting belief of our ability to maintain it.”

Translation: We are pro-slavery because we need slaves to work the cotton fields because only black people can withstand the tropical sun. Slavery is our money-maker, without it we have no commerce. If you won’t allow us this, we’re out of here.

South Carolina
A Declaration of the Immediate Causes which Induce and Justify the Secession of the State of Mississippi from the Federal Union.

South Carolina provides a most meticulous accounting of United States history that goes back to 1765, and the rights of FREE AND INDEPENDENT STATES (their caps, not mine) standing against the British monarchy, the Declaration of Independence, and how each state had separate control over its own institutions, including “the right of property in slaves.”

“We affirm that these ends for which this Government was instituted have been defeated, and the Governments itself has been made destructive of them by the action of non-slaveholding States. Those States have assumed the right of deciding upon the propriety of our domestic institutions; and have denied the right of property established in fifteen of the States and recognized by the Constitution; they have denounced as sinful the institution of slavery; they have permitted open establishment among them of societies, whose avowed object is to disturb the peace and to eloping the property of the citizens of the other States. They have encouraged and assisted thousands of our slaves to leave their homes; and those who remain, have been incited by emissaries, books and pictures to servile insurrection.”

“This sectional combination for the submersion of the Constitution, has been aided in some of the States by elevating to citizenship, person who, by the supreme law of the land, are incapable of becoming citizens; and their votes have been used to inaugurate a new policy, hostile to the South, and destructive of its beliefs and safety.”

They go on to say that the North has invested in a great political error with the sanction of more erroneous religious belief, and then declares itself as a separate and independent State (country) to do whatever they want to do. Hmph!

Texas
A Declaration of the Immediate Causes which Induce and Justify the Secession of the State of Mississippi from the Federal Union.

“ … she (Texas) was received as a commonwealth holding, maintaining and protection the institution known as negro slavery — the servitude of the African to the white race within her limits — a relation that had existed from the first settlement of her wilderness by the white race, and which her people intended should exist in all future time.”

“ … all white men are and of right ought to be entitled to equal civil and political rights; that the servitude of the African race, as existing in these States, is mutually beneficial to both bond and free, and is abundantly authorized and justified by the experience of mankind, and the revealed will of the Almighty Creator, as recognized by all Christian nations; while the destruction of the existing relations between the two races, as advocated by our sectional enemies, would bring inevitable calamities upon both and desolation upon the fifteen slave-holding states.”

Translation: You knew we stood for slavery when we came into the Union, and to upset the apple cart now would bring some very bad juju between whites and blacks. Besides, God said that’s the way it should be.

Virginia
The Secession Ordinance. An ordinance to repeal the ratification of the Constitution of the United States of American by the State of Virginia, and to resume all the rights and powers granted under said constitution.

“The people of Virginia, in their ratification of the Constitution of the United States of America, adopted by them in Convention on the twenty-fifth day of June, in the year of our Lord one thousand seven hundred and eighty-eight, having declared that the powers granted under the said Constitution were derived from the people of the United States, and might be resumed whensoever the same should be perfected to their injury and oppression; and the Federal Government, having perverted said powers, not only to the injury of the people of Virginia, but to the oppression of the Southern Slaveholding States.”

“ … do declare that the said Constitution of the United States of America is no longer binding on any of the citizens of this State.”

The full text of those five states’ declarations can be read here.

When people invoke warm, fuzzy images of a southern way of life, they’re invoking an imaginary time of mint juleps, magnolia blossoms, hoops skirts, chivalry, pecan pie, and the supposition that all was right in the South. In reality, they’re referring to a time long gone with the wind and an economic system for thirteen states that perpetuated a lifestyle of genteelness transplanted from British aristocracy veneered over inhumane oppression meted out in celebrated events of murder, lynchings, rape, and black families torn asunder, all in the name of King Cotton. Men fought, died, and were ultimately defeated championing a deeply flawed and morally reprehensible lifestyle built on the broken and bloodied backs of black Americans … people who look like me … my ancestors. And from whom American norms such as freedom, equality, education, and religion were withheld.

You can not have the glory of plantation life with its southern hospitality, belles, and gentlemen without the horrors of the institution of slavery to provide the economic means to support it.

If we lived in a society in which people regarded these monuments in the unvarnished context of the actual damage inflicted to generations of black Americans, as well as the 620,000 deaths of soldiers, all in the name of a brutal cause, I doubt anyone would want them to stand as tributes. But that’s not the world we live in. These monuments serve as a touchstone to racism as evidenced by gatherings like the ones pictured by the image above.

White people, if you don’t support that position, it’s incumbent upon you to make that known to those who do (white supremacists, Nazi sympathizers, white nationalists). When the descendants of Civil War generals speak out in favor of removing monuments to their own predecessors, that should be a sign to all that the time has come to take them out of public spaces.

So tell me why can’t the regime in power, along with a portion of the citizenry “let go of the past” and stop validating, lauding, and tacitly endorsing the efforts of white supremacists, Nazis, and the Confederacy to destroy democracy? How does elevating their efforts to the same plane as those who stand for equality, Civil and Human Rights show respect and love to one another?

It doesn’t. It bears no resemblance to love and respect in any way, shape or form.

Removing Confederate memorials is not an attempt to erase history. It’s a monumental first step in healing.