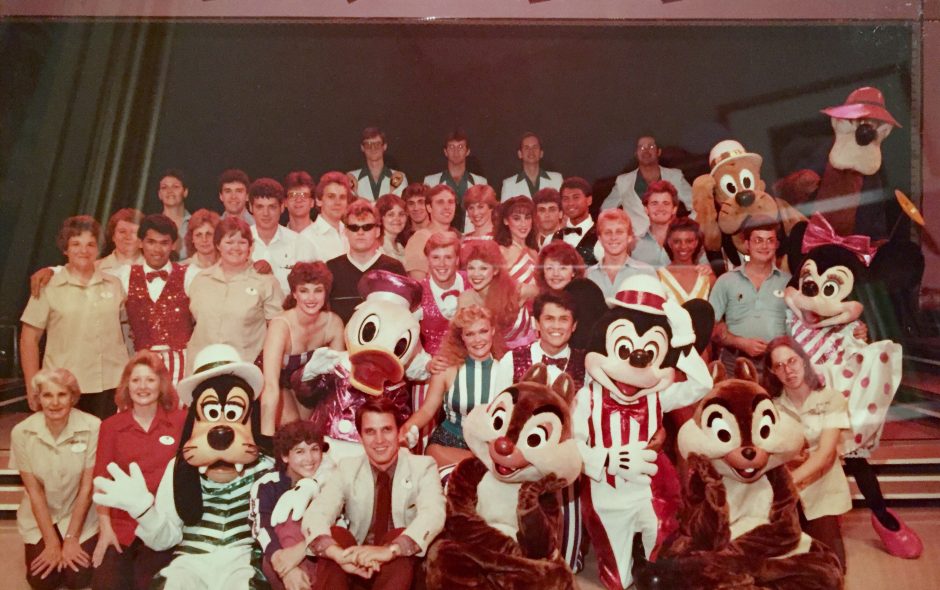 The cast and crew of "Show Biz Is" around 1980-something.

We all have backstories; adventures and foibles few would believe the people we are now would ever be a party to. So in the interest of mixing it up a little, this week I’m unpacking the story about almost committing professional suicide on-stage. During a show. Enjoy!

Inspring 1980-something or other, an explosion in the number and quality of new shows, parades, trips, and tours for Disney characters started what inhabitants of the Zoo at that time referred to as The Golden Age of Characters. Two wildly exciting shows, Show Biz Is and Makin’ Memories, launched a long line of shows to hit the Walt Disney World.

Anyone in the department who could do a jazz square showed up at the auditions. No one wanted to get out of doing seven exhausting meet-and-greets and a parade a day more than I did. It wasn’t that I didn’t enjoy taking photographs with guests and giving them autographs, but if I could get paid the same amount of money for spending less time in costume by performing in a show, why not?

At the auditions, two show directors took copious notes and put us through our paces. A few days later, the cast list was posted and . . . both directors cast me as Donald — in both shows! I had been handpicked from a field of my contemporaries and found to be the best of the group. Okay, so maybe a grand total of six people vied for the Donald roles, but nevertheless, it was better to be a Have than a Have-Not. Who would have guessed only a few months ago that something like that would have happened to yours truly? Not me.

Preparations for opening Show Biz Is was like character bootcamp. Barnette, the show’s director and choreographer, ran her rehearsals like a drill sergeant. From my theater experience in high school and college, I knew that the director had the first and last word on everything. I also knew that if I wanted to hang onto the role of Donald, I’d better learn the choreography as quickly as possible. During the daytime rehearsals at a designated rehearsal space, we learned individual numbers one at a time, working our way up to a completed section, then we moved on to the next section learning numbers, and so on.

A few weeks later, late night technical rehearsals began onstage after the Park closed. The first two nights were reserved for blocking and running through the show in rehearsal clothes. Lighting, props, and special effects were added the following night. Backstage traffic patterns had to be mapped out so the technicians could preset and pick-up dozens upon dozens of props and set pieces. Each night had its own challenges, but when the costumes were added to the mix on the last two nights, it took the cast and crew to a whole new level of terror.

The downtime I had between my onstage appearances was re-appropriated to quick-changes into different costumes for subsequent numbers. Now multiply that activity by seven other characters, twelve dancers, all with quick changes of their own at different times, plus a team of dressers, stagehands, and a band, and you had the choreographed backstage pandemonium known as Show Biz Is.

In rehearsals, we characters dressed in rehearsal clothes, but once our costumes were added we had to be aware of the dancers, and the dancers had to accommodate our limited vision and adjust for our considerable increase in size. And while the choreography the dancers performed was light years beyond what we characters were required to do, Barnette still held us to the same exacting standard.

Show Biz Is was no high school musical. And Barnette didn’t run it like one. She sat out in the house of the theater and broadcast her notes via microphone and loudspeaker. Anything less than perfection? Unacceptable! Do it again!

When the show opened, I never felt more alive than when I was on stage sweating and dancing my heart out. Despite initial feelings of being in way over my head, I was relieved to have proven to myself that I could step into a challenging situation like that and deliver the goods. It thrilled me to be chosen to work with such accomplished singers and dancers who were absolutely dedicated to their craft. Unbeknownst to me then, the groundwork was being laid for lifelong friends and good work habits.

Show Biz Is was a musical revue of the history of show business featuring the Kids of the Kingdom singers and dancers, with Mickey, Minnie, Donald, Pluto, Goofy, Chip and Dale in cameo appearances, all accompanied by a live band. The show began with an overture and an opening number that reminded audiences what they liked so much about “show biz.” This was followed by a tribute to the circus; a rousing tap number that segued into an homage to silent movies; then a high-kicking, banjo-strumming number from the musical Show Boat. During all those numbers, I sat in the wings and waited for my first entrance in the show as a film director at the top of the “Hooray for Hollywood” section.

One day I was bored and the cast was worn from performing five shows a day in the sweltering Florida heat and humidity, so I decided to liven up things with a practical joke.

The plan was this: at the beginning of the silent movie tribute, while all the dancers were on stage, I (with the aid of the show’s prop master) would hop into the steamer trunk that was to be rolled onstage by a female dancer dressed as Charlie Chaplin. At the choreographed moment, she would open the trunk and when she went to pull out a pink corset — surprise! — she’d see me lying in the trunk, slam the lid closed, and slowly wheel the trunk to a downstage corner where she would join the other dancers for a heart-wrenching rendition of “Smile.” After the song, the trunk would be hurriedly shoved into the wings, leaving me one minute to get out of the trunk and into my Donald Duck costume, and traverse a four-foot-tall staircase for my big entrance. And the show would go on as written.

That was the plan. It was foolproof.

What could go wrong?

Any number of things.

The trunk could tipped over and a small black man in a T-shirt, shorts, and yellow tights the same color as Donald Duck’s legs and bill would fall out onto the stage in front of hundreds of guests. And what was the possibility of the guests putting two and two together? Very likely. Any eight-year old would have been able to figure out that the small Black man in yellow tights running into the wings was Donald Duck. Given how tight-lipped Disney was about the Characters, if that happened, I would surely be fired.

Nevertheless, I figured what the heck? I fancied myself to be a thrill-seeker.

Trying to keep a secret around the Tomorrowland Theater was a feat unto itself. So I told no one, except the prop master and our dresser. But when the show started and I hadn’t begun getting dressed, my fellow characters suspected something was up.

When the time came, everything went according to plan. Unnoticed by the dancers onstage, I slipped into the open trunk and the prop master closed the lid. I was cool as a cucumber as I got wheeled into place in the wings.

“Charlie Chaplin” came over and comically pushed the steamer trunk to center stage, with me inside. My heart was racing a mile a minute. I prayed to God in Heaven to keep the trunk upright.

Mr. Chaplin flipped the trunk open, swung around, and grinned at the audience. By then, word had spread backstage and everyone had crowded into the wings to watch the prank unfold. At the precise moment she turned her attention upstage to the trunk, I yelled “boo!” and tossed the corset in her general direction. The poor gender-bending female dancer let out a piercing scream and the cast and crew erupted in laughter. She slammed the trunk’s lid closed and wheeled the trunk downstage while she and all the dancers on-stage tried in vain to suppress their laughter during the song.

They failed miserably. They couldn’t sing a single word of the song. At the end of the number, the dancers hurriedly shoved the trunk (with me inside) into the wings. This marked the beginning of my work. I had to get into my costume and make my entrance on-stage. I catapulted myself out of the trunk to the cheers of my fellow characters and the backstage crew and wondered What the hell have I done? I tripped and fell as I ran back to my dressing station. If I missed my entrance I was doomed. The Donald Duck voice was a part of the pre-recorded soundtrack. If that voice boomed throughout the theater with no Donald on the stage —

“Clay, why did you miss your entrance?” the stage manager would ask.

“Uh, I was playing a practical joke?”

The potential was there for the stage manager to have my head on a platter seconds after the curtain came down on the performance if I didn’t make my entrance. My stage manager was not one to be toyed with. Ever. I was doomed whether I made it or not.

A two-man team of faithful dressers jammed the requisite costume parts onto my body; then velcroed, hooked, and snapped everything in place without a second to spare as I ran up the steps and made it onstage in time for my lines, “Lights! Camera! Action!”

After the show, my stage manager gave me a stern look tempered with a half-smile. He and I never spoke of the incident, thank God. That stunt pretty much sealed my reputation as the mischief-maker to count on when things were a little dull.

And I never pulled that prank again.

With that particular cast.

Embrace all that you are and strive to become all God has created you to be.