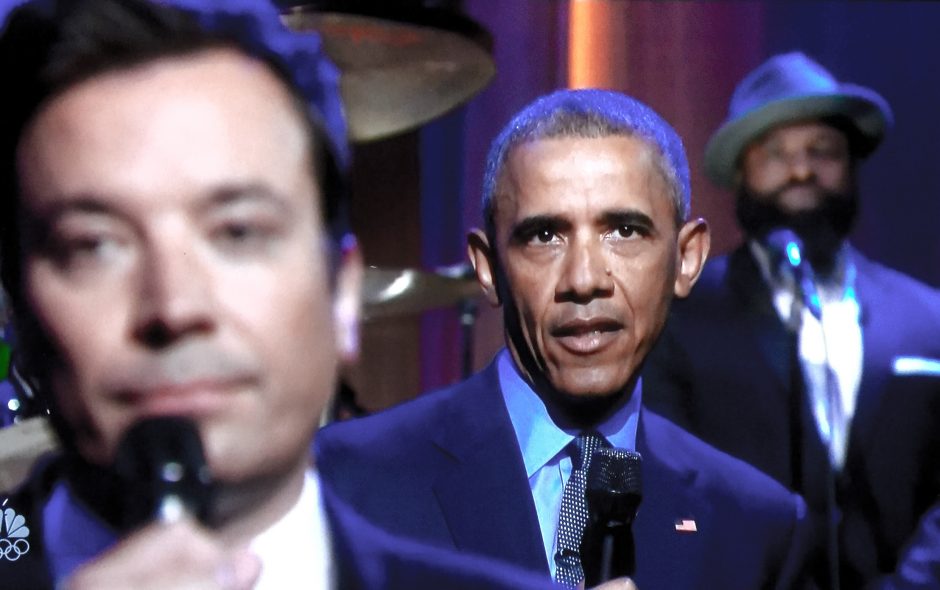 If you know me at all you know that I’m a fan of Jimmy Fallon, the host of The Tonight Show with Jimmy Fallon. Since he took over @FallonTonight (as the show is known on Twitter) in February 2014, the show’s been the one to beat in late night TV wars.

Within the first month of Fallon’s reign, I scored tickets to see Episode 29 (with guests Russell Crowe and the late Joan Rivers) thanks to one of my stagehand-friends from the Radio City Christmas Hall Christmas Spectacular. Seeing the show in person was a thrill, especially one of the early episodes.

Fallon announced on Wednesday (the day after Hillary Clinton became the presumptive Democratic presidential nominee) that Thursday’s guests would be President Barack Obama and Madonna.

Hells yeah! Two of my favorite celebrities on the planet on the same stage and I could see them from the comfort of my living room! For free! [Cue: “Express Yourself” intro]

Thursday afternoon, I tweeted this in anticipation—

#ObaMadonna! #MadonnaBama—take your pick! Tonight’s #FallonTonight is going to be one for the record books!

And about 10:00 p.m., an hour and a half before the show, I was checking out Twitter on my phone when the following tweet appeared—

Yesiree, I almost dropped my phone! I’ve met, worked with, and for celebrities, so I’m not quickly starstruck, but I guess it was the randomness of it all that caught me off guard and giddiness set in for the rest of the night

Tonight’s episode did not disappoint. Jimmy kept it real, no fawning. The President “slow-jammed the news,” and stuck around for the remainder of the show to join Jimmy in a special edition of “Thank You Notes.” And Madonna’s performance of her first hit, “Borderline” took me back to 1984. Jimmy Fallon, the Roots, and Team Tonight Show pulled off their best show ever.

Along with making some serious headway in re-typesetting a book for a client, I’d say today proved to be a pretty good day.

One of the FalPals tweeted this—

No matter who gets elected it's fair to say we won't have another president as cool as Obama for a long time. #FallonTonight

I’m inclined to believe him.