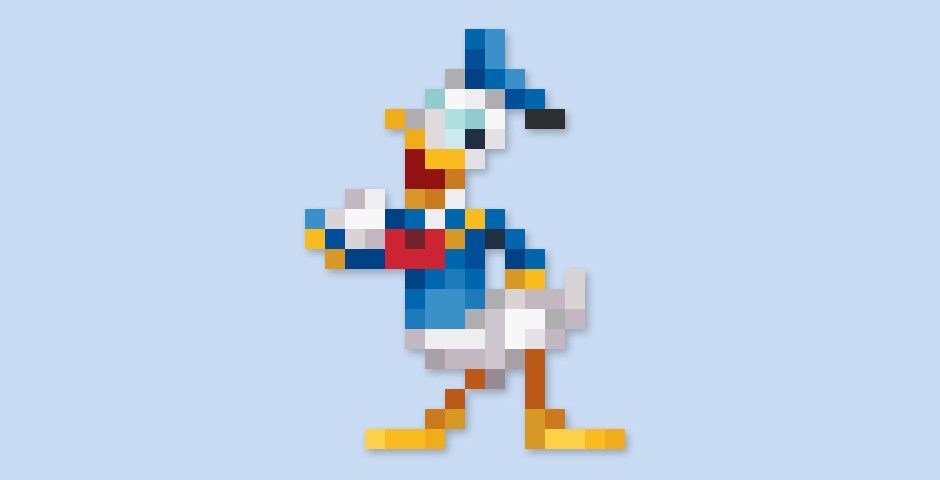 In the original text I promised to—at some point in the future—reveal a little of the backstory of my adventures performing as Donald Duck at Walt Disney World in Florida. Well . . . that time has come for me to tell you about my life in fur.

Living life to the fullest in college became an expensive undertaking. I needed a little more cash to keep my collegiate lifestyle afloat. Christmas break 1981, I applied for a seasonal job at Walt Disney World, knowing they’d usher me into a high-paying office job related to my Communications major for the two weeks of my Christmas break. After waiting in the employment center lobby for what seemed like an eternity, a man in a business suit and a Disney name tag with “Mark” etched into it, greeted me and led me into a small interview room.

“Your application says that you’re interested in a position in our Marketing department?” he asked.

“I thought Marketing would be a good place to start since I’m a Communications major.”

“Unfortunately, at the moment we don’t have any openings in our Marketing department.” Mark paused for a moment, then a smile crept over his face that meant only one thing: he had a brilliant idea.

“Could you hold on for a moment?” he asked.

“Sure.” I said as I watched him make a call. I knew I was special, gifted even, and apparently my interviewer picked up on it, too. I assumed he was giving me a leg up to the Marketing department!

“Yeah. Hi, Chris. This is Mark over in Casting. I’ve got someone I’d like you to meet,” the interviewer said as he glanced over my application. “Yes, he’s got related experience. Great. Thanks!”

“So, you found something in Marketing?”

“I see that you’ve had some theater experience.”

“Yes?” I had no idea where he was headed.

“I was just on the phone with someone from Entertainment. We have an opening in our Character Department. Would you be interested in going over for an audition as one of our costumed characters?”

Mark handed me a map, some directions, and sent me on my way.

Minutes later, I was learning a dance routine from someone deep in the underbelly of the Magic Kingdom. I performed the routine to their liking and passed the dance portion of the interview, two wardrobe personnel strapped cumbersome costume pieces to my body. I stood stiff as a board in front of a small committee with a Donald Duck costume hanging on my frame. None of it made sense. I had no idea how I wound up there. I didn’t want to be there. And I definitely didn’t want the job.

A bead of sweat rolled down my face and I couldn’t reach it.

“Is that it?” I asked from inside the duck costume, perturbed that my career in Marketing had been hijacked.

“Oh, sure,” the Entertainment representative said.

I got out of the Donald Duck costume — from the top of that sailor hat to the soles of the webbed feet — put on my clothes, and got back to my car as fast as possible. The whole experience was like a bad Fellini movie. Me? In a duck costume? The idea was preposterous. I was close to finishing my degree. A duck? I never like Donald Duck. He was too hot tempered, too mercurial, too moody.

On the drive home, I gave thought to walking around in a character costume sweating out all of my bodily fluids instead of sitting behind a desk in the comfort of an air-conditioned office. The idea struck me as criminal. Why would I want to do that to myself?

By the time I reached home, my mother informed me that someone from Disney’s Character Department had called for me thirty minutes before I arrived.

I strolled into the Walt Disney World character office, more affectionately known as the Zoo, with my game face securely in place and confidently picked up my company issued T-shirt, shorts — known as blues — and yellow-orange tights and headed for my locker. Everyone was full of energy and very helpful. The guys in the dressing room introduced themselves and welcomed me. I forced myself to match their enthusiasm about being there. It struck me as odd that they would refer to themselves as “characters.”

The Zoo was crazy with activity. Other characters had already changed from their street clothes into their blues and were milling about. A few were heading off to have breakfast. Some shuffled off for parts unknown with their costumes in heavy black bags slung over their shoulders. Others gathered their costumes and headed off to Walt only knew where.

A guy named TJ led me over to an over-sized blue service counter, known as the Character Wardrobe window, to pick up my costume for the day. He was my “lead,” that’s Disney-speak for a middle management person who made sure characters didn’t do anything they could get fired for.

“Morning, Boots,” TJ said to the woman behind the counter.

“What can I do you for?” she asked. Boots was plump, very Southern, and as pleasant as sweet iced tea.

“ — a Donald,” they said as if it was the punch line to an inside joke.

“Be right back,” Boots continued as she trotted back into the hanging racks of dozens of character costumes. “What’s your shoe size?”

Moments later, Boots returned and handed me a Donald Duck costume on a massive silver hanger, along with a disembodied head. TJ helped me carry all my costume pieces down a long corridor that seemed to lead to the center of the Earth. We emerged in what was referred to as a backstage area behind the buildings of Main Street, USA.

We arrived at the dressing area and a petite woman with dark brown hair greeted us. She obviously had worked as a character for a while. She was personable, very chatty, eager to start the day; dressed in a very familiar red and white polka dot dress and enormous cartoony yellow pumps from the waist down, and in a black long sleeve leotard and a do-rag wrapped around her head from the waist up. She put on the remainder of her costume in seconds. I hated her for knowing what she was doing. The only thing she needed help with was zipping up the back of her Minnie Mouse dress.

I wished I paid more attention to what the Wardrobe specialist told me during my fitting when I auditioned. I wanted to slip into the costume with ease and come off as little like a boob as possible. It took me about ten minutes to get all those freaking pieces on. And by the time I got them all on, it was time to head out into the Park.