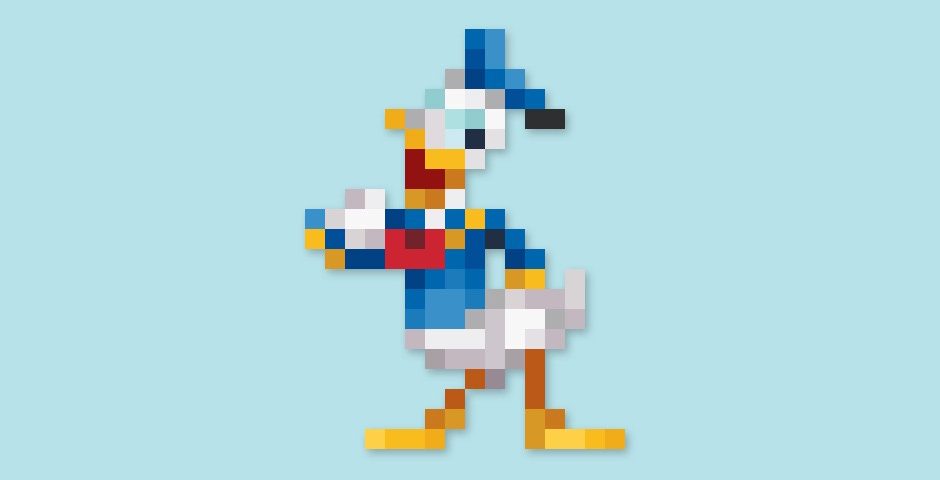 I wished I paid more attention to what the Wardrobe specialist told me during my fitting when I auditioned. I wanted to slip into the costume with ease and come off as little like a boob as possible. It took me about ten minutes to get all those freaking pieces on. And by the time I got them all on, it was time to head out into the Park.

My interpretation of Donald on the way to the nondescript door that led into the Park had all the grace and style of Frankenstein’s monster. A couple of times, I almost tripped and smashed the yellow-orange duck bill that jutted out at least a good twelve inches from my face, thanks to the rubber feet I wore. I couldn’t see. And most importantly, I couldn’t breathe. I thought I was going to breathe up all the air inside the oversized fishbowl of a head. I wasn’t claustrophobic, but wearing that costume was reason enough to become stricken with the fear.

TJ encouraged me as we approached that nondescript door.

Once I crossed the threshold, I stepped into a land more wonderful than Oz as imagined by Walt Disney. TJ led me to a scenic little spot in front of a garden of poinsettias. From what I could see I was next to City Hall in Town Square.

He whispered, “I’ll be right over here.”

“Okay,” I said in a very audible voice.

And then he disappeared from view.

I faintly heard the Christmas soundtrack playing in the background.

“Fa-la-la-la-la — la-la — la — la!” I hummed to myself and tugged my blue spandex sailor shirt down. I looked out of one eye and saw a river, teeming with guests (that’s Disney-speak for tourists), streaming before me. The reason for that deluge of guests: I stood only a few yards from the main entrance to the Magic Kingdom. There was a key bit of information no one warned me about: the day after Christmas is to the Magic Kingdom what New Year’s Eve was to Times Square. And at that moment, I was the mayor of New York City.

In a matter of seconds, tourists swarmed me. Autograph books were shoved into my face, some open, most closed. Kids were hugging and hanging all off me. Moms shoved their kids into my arms. Dads slapped me high five. People were excited to the point that the possibility of someone wetting their pants in my presence seemed highly probable. It was mayhem.

I panicked. I couldn’t understand why everyone was coming up to me. It was just me, Clay, doing a little seasonal job for some extra college cash, but the guests didn’t know that. They saw their favorite animated character in spandex, fun fur, and webbed feet. Everyone seemed to have forgotten that there was actual flesh and blood in the Donald Duck costume.

Someone managed to get one of those autograph books into my right hand. And miracle of miracles — it was open! They slipped a pen on to my left palm. For a second, I had no idea what I was supposed to do with the items in my hands.

Oh, okay! I’m supposed to sign this thing! I can do that!

But I wasn’t left-handed. So I had to try and put the autograph book in my left hand and the pen in my right. At the same time, people were trying to have a personal moment with their favorite character. Hurriedly, I tried to see the autograph book I wanted to sign, but before I could even get a glimpse of the page it was ripped from my hand.

“Don’t sign on that one, Donald. Mickey signed there.”

Fuck Mickey, my mind screamed. Do you want me to sign this thing or not?!

Someone gently guided the autograph book back into my left hand.

I felt bad about thinking thoughts so contrary to what Disney was all about.

I rested the autograph book on Donald’s bill and scrawled “Donald Duck” as best I could. The part of the autograph I saw looked more like chicken scratch than a signature. I was frustrated with myself. I had perfect penmanship and I could draw, but I couldn’t write “Donald Duck.”

“Thank you, Donald!” A fleeting voice shrieked and the autograph book was ripped from my hands. Someone actually appreciated all that effort.

“You’re welcome!” I called, then winced, remembering the no-talking rule. I promised myself the next time I got my hands on an autograph book, I’d do my best to give a proper autograph. Little did I know that I would have countless opportunities to perfect my Donald Duck signature. Before me guests waved dozens of autograph books at me.

TJ showed up thirty minutes later and led me away as I clutched his hand as if my very life depended on it. I felt like it had been a good hour since I had been thrown to the wolves. He calmly waded through the flood of clamoring tourists and announced to everyone that Donald had to go help Huey, Dewey, and Louie with their new Christmas bikes because they ran them into the Jungle Cruise. The tourists ate it up. At the same nondescript door, I turned and shooed everyone away. The guests all laughed at Donald’s irritability. Little did they know how close to the surface myirritability was running at that moment.

Once I made it to the other side of the door I felt the adrenalin rush subside. I began the trudge back to the changing area. From inside my Donald Duck head I saw that many other character performers in various states of dress had come to do tag-team meet-and-greets. A Goofy, a Tigger, a Winnie the Pooh, Three Pigs, a Big Bad Wolf, and some other characters I was in no mood to identify stopped to stare at me, the new guy. I grabbed my Duck head by the bill and flipped it off my own head and gasped for air. I’m sure the look on my face was one of absolute disgust.

I still had seven more meet-and-greets that day.

And five more days to go.